Denver-to-Aspen: At the Mercy of the Winds!

The Joe Lookingbill Denver-to-Aspen Classic, contested June 15, 2013, marked the official "kick off" to the 2013 Colorado Triple Crown, Colorado's most difficult road cycling series! This year's Denver-to-Aspen had 29 preregistered riders, the largest number of riders since the RMCC ran the event as a public ride during the 1990s. On paper, the route created by Joe Lookingbill (the master-mind behind the Denver-to-Aspen course) doesn't look very formidable. The current route features 13,000+ feet of climbing in 180 miles...not a terrible stretch from Team Evergreen's Triple Bypass, which features 10,000+ feet of climbing in 120 miles. But as Denver-to-Aspen veterans know, this course--which passes through the heart of the South Park Valley--can become exponentially more difficult than the Triple Bypass, depending on the directions of the prevailing winds. This year's participants were definitely at the mercy of the winds...

In 2012, Denver-to-Aspen participants encountered some of the most favorable winds in the history of the event, conducive to producing record times for nearly every participant, including the first sub-ten hour times ever recorded in the history of the event. This year, however, the prevailing westerly winds were not as kind to Denver-to-Aspen participants. Riders who were fortunate enough to finish early in the afternoon were not as adversely affected by the westerly headwinds as those riders who finished later in the day.

At the 4:00 am start, riders encountered comfortable temperatures in the low-60s and light northwesterly winds. However, it became apparent very early during the day that it would not be a day for records to fall. Right from the start, riders began to experience light westerly headwinds as they climbed Deer Creek Canyon to Conifer. The winds gradually intensified as riders advanced westward along US-285 through Bailey and Grant toward Kenosha Pass, the eastern gateway to the South Park Valley. Upon entering the South Park, the northwesterly winds continued to intensify for many riders. By the early afternoon, as many riders arrived at Buena Vista and the scenic Twin Lakes, many participants were getting throttled by the gusty winds. For many riders, the breezy conditions made the climb up Independence Pass (12,095 feet) seem much more difficult. The gusty conditions definitely took their toll on the psyche of many participants, including RMCC veteran, Kelly Shannon. Kelly commented on this year's windy weather, "This is my ninth Denver-to-Aspen...and these were by far the most brutal headwinds I've ever experienced!" RMCC president, Charlie Henderson, providing event support for this year's event, concurred with Kelly. "Many riders really struggled with the wind this year. The winds were much more difficult to contend with this year than last year!"

In spite of the less-than-ideal wind conditions, a few riders did manage to post personal best times on the challenging Denver-to-Aspen course. And temperatures remained pleasant throughout the day, reaching the low-60s on top of Independence Pass and the upper-70s in Aspen, which was bustling with activity from its annual summer food and wine festival. Fortunately, skies remained rain (and snow) free for the entire day!

Congratulations to the trio of Brendan Billingsley, Mark Lowe, and Eric Nelsen for posting the fastest time of the day with a time of 10 hours, 5 minutes. The three riders, who were accompanied by Ryan Franz before Ryan had an unfortunate flat to the north of Buena Vista, encountered much less breezy conditions than riders who finished later in the day. This was Brendan's first Denver-to-Aspen, as well as his foray into long-distance cycling! Riding his second D2A, Eric improved on last year's time by 49 minutes. And congratulations to Diane Benoit, who once again rode hard--handling the adversity of the wind--to repeat as our first female rider!

Congratulations to all of this year's finishers!! Final results will be posted on the RMCC website soon...

Special thanks to our stellar crew of volunteers--Charlie Henderson, Hunter Johnson, Penny Nelson, and Diana Shannon--who made this year's event run flawlessly!

Here are the highlight from this year's event: 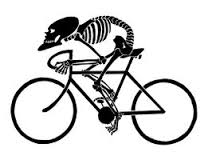