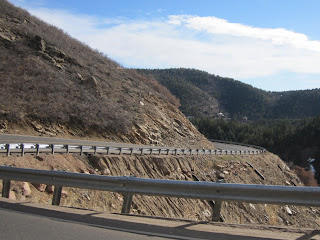 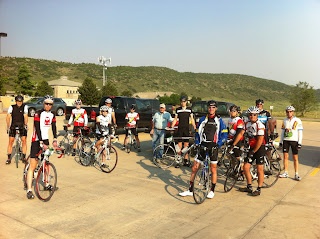 
Fifteen RMCCers lined up for the inaugural Boulder Fearsome Five on Sunday, May 6, 2012, a new, extremely challenging RMCC event. This event features a unique format: participants had ten hours to climb (and descend) Boulder County's five most difficult climbs, including Flagstaff Road, Magnolia Road, Sugarloaf Road, the Fourmile Canyon-to-Sunshine Canyon Loop, and James Canyon/Overland Road (aka the "SuperJamestown") via Lee Hill Road. Mile-for-mile, this is the most difficult event the RMCC has to offer, featuring multiple climbs with insanely steep pitches. And given the steep grades and high altitude, this course is very likely the most challenging century course in the nation! The route climbs over 14,000 feet in a mere 98 miles. It also includes a tricky, somewhat technical (for road bikes) seven mile dirt and gravel section during the climb up Fourmile Canyon, through the community of Gold Hill, and windy descent down the upper three miles of Sunshine Canyon.

When asked why the event was placed so early on the RMCC cycling calendar, event organizer Mark Lowe responded, "this event is really meant to prepare riders for the much more difficult events the club has to offer later in the summer...whether it be a mountainous brevet or one of the Colorado Triple Crown double century events. Plus the non-competitive format is conducive to greater rider participation. And even if riders can't (or don't want to) complete all of the climbs, riders are guaranteed to get a great workout!"

Most riders would agree with that. However, many riders weren't so excited about riding the dirt and gravel roads over Fourmile Canyon and Sunshine Canyon. RMCC speedster and Paris-Brest-Paris (PBP) Charly Miller recipient (sub-56 hours, 40 minutes), Billy Edwards, definitely wasn't so keen about the dirt roads. "I don't know...some of those gravel sections were pretty sketchy!" Ryan Franz, also a Charly Miller recipient from last summer's PBP, disagreed, "I've ridden thousands of miles on roads like that." Club veteran, Will de Rosset, agreed with Ryan, stating that "it really wasn't that bad!"


At the start, riders were greeted by partly cloudy skies, cool temperatures in the mid-50s (much cooler than the summer-like temperatures the Front Range had been experiencing over the previous several weeks), and relatively gentle (but chilly) breezes. As the day progressed, however, the Boulder Fearsome Five truly lived up to its name as the weather became a bit more "fearsome" in its own right. Temperatures began to plummet as the afternoon progressed, and riders experienced snow showers--heavy at times--on James Canyon Road and Overland Road, an unpleasant surprise to many riders who were inadequately prepared for the winter-like weather! A couple of Fearsome Five participants made the ill-fated attempt to complete the climb up the SuperJamestown as the nasty, bitter weather progressed, only to become hypothermic during the frigid descent. Fortunately, Jamestown locals rescued these riders, sagging them back to the Eben G. Fine park.


Event results will be posted shortly on the RMCC website according to number of climbs successfully completed, not according to time. Congratulations to Ryan Franz, however, for setting the club benchmark for the course! Ryan completed the mountainous course in 7 hours, 21 minutes, a truly impressive feat for this very challenging course! Congratulations to all of the riders who participated in this insanely difficult new RMCC event!

Interestingly, several riders felt "cheated" that the course route was only 98 miles...not 100 miles. We'll see if we can fix that for next season!

Special thanks to RMCC veteran, Dick Wiss, who gave up his Sunday to provide event support!!!

What the riders said about the Boulder Fearsome Five:
"Great, challenging course! I would come back again. It's in my backyard!"
-Ryan F.

"Great event! Thanks for organizing it!"
-Sheeyun P.

"I was shivering so hard that I couldn't control my bike!"
-Chuck M.

"I can live with myself for only completing four climbs!"
-Sandy P.

When asked about the event, Billy E. didn't say a word as he prepared for his frigid descent down James Canyon Road...he just gave me the one-finger salute. (I consider that a compliment when talking about this course BTW! :)

"This course could only have been created by the mind of madman!!! Wait a second...that was me!"
-Mark L.