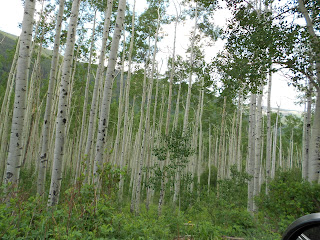 The 2012 Joe Lookingbill Denver-to-Aspen Classic is in the books! And it truly was a classic! For the first time in recent memory, the cycling gods and weather gods came into near perfect alignment to produce near "perfect" weather conditions, conducive for comfortable riding conditions and blazing fast times for many riders.

The Denver-to-Aspen course features over 13,000 feet of climbing (some of it at very high altitude) in 180 miles. Denver-to-Aspen, perhaps more than any of the other event of the Colorado Triple Crown, is at the mercy of the weather gods. Headwinds across the South Park Valley or the Arkansas River Valley (from Buena Vista to Twin Lakes) can easily add one-to-two hours to rider's finishing times. This year's Denver-to-Aspen, however, had the most cooperative winds in recent memory. Charlie Henderson, RMCC club president and ride leader, summed it up best, "In all of the years I have been running this event, I have never seen winds as favorable as these!" Indeed, it was a pleasant surprise to all of this year's participants to encounter light tailwinds from Fairplay to (and over) Trout Creek Pass AND a gentle southwesterly tailwind from Buena Vista to the turn-off for Hwy 82 at Twin Lakes, a truly rare occurrence for this event.

Many riders started the event with a bit of trepidation about the weather forecast. The generally favorable forecast in the days leading up to Denver-to-Aspen had deteriorated significantly in the 36 hours prior to start of the ride, with forecasters predicting a 50% chance of rain and risk of severe thunderstorms in the Denver area. Much to the chagrin on this year's participants, the wet weather never materialized west of Kenosha Pass as had been predicted. Riders did encounter a few light rain showers on the eastern slopes of the Independence Pass and headwinds off of Twin Lakes, but the generally cooperative weather had most riders grinning from ear-to-ear!

Right from the start, riders encountered a gentle tailwind from the east as they ascended Deer Creek Canyon and High Grade Road. RMCC veterans Ryan Franz and Mark Lowe, accompanied by RMCC new-comer Eric Nelsen, set a brisk pace up the first climb of the day, clearing Pleasant Park in a mere 61 minutes before tackling the westward rollers along Hwy 285 through Aspen Park, Pine Junction, and Bailey. Ryan and Mark continued to ride together, cresting Kenosha Pass (10,001 feet elev.) in record time (3 hours, 1 minute). From the moment both riders made the plunge from Kenosha Pass into the South Park Valley, it became gleefully obvious that the virtually omnipresent headwinds of the South Park Valley had taken haitus for this year's Denver-to-Aspen. Ryan and Mark continued a brisk paceline over Red Hill Pass (9,993 feet) into Fairplay. Ryan started to back off the pace a little bit south of Fairplay and Mark--salivating once again at the temptation of riding a sub-10 hour Denver-to-Aspen--dropped the proverbial "hammer," picking up the pace to clear the South Park Valley from Kenosha Pass to Buena Vista in 2:28 (23.9 mph).

With the blessing of gently southwesterly tailwinds (and with Ryan in hot pursuit), Mark continued a brisk pace from Buena Vista up to Twin Lakes and up the plush eastern slopes of Independence Pass (12,095 feet elev.), ultimately clearing the pass 8 hours, 38 minutes after the 4:00 am start in Ken Caryl. In the end, Mark and Ryan both eclipsed the 10-hour barrier, a first for this event. Mark's 18.62 average speed bettered his 2011 course record by 24 minutes. However, former professional racer Michael Carter's 19.1 mph average speed, recorded when Denver-to-Aspen was run as public double century event during the late 1990s, still remains the fastest mile-per-hour time recorded on the Denver-to-Aspen route. Steve Rudolph, at 52 years young, rounded out the men's podium with a stellar sub-11 hour Denver-to-Aspen, a personal best for Steve. Diana Benoit, our lone female competitor for 2012, also posted a personal best time on the Denver-to-Aspen course. RMCC distance legend Carol Hvrada's average speed of 16.1 mph, recorded in 2005 when Denver-to-Aspen was run as a 300 km brevet, remains as the female benchmark for this event.

Congratulations to all of this year's riders!

Thanks to Charlie Henderson and Dan McDonald for providing event support for this year's Denver-to-Aspen.

Full results will be posted on the RMCC main page soon.